So I'm thinking of painting my nails. "Big deal," you say, while rolling your eyes with boredom. But it kind of is for me. There was a time in my life where my nails were never seen in public unpainted. That was mostly in high school, then college life took over and I learned that you should let your nails breathe for at least 24 hours between polishing so they don't turn yellow and brittle. And 24 hours would turn into 48 then 72... and I was no longer a nail diva. Then I had a baby and it was all over for my nails. I mean between breastfeeding and sleeping and diaper changing and eating and etc, well I was lucky to get a shower in there somewhere, much less a manicure. And really if I did get some time for myself was I really going to waste it doing a manicure. I think not.
Well recently I am coming out of the mommy coma. My son is 10 months old and I can actually do a manicure after he goes to bed and be relatively sure that I can have overnight for them to dry completely.
So now comes the dilemma. I'm kind of into this non-traditional french tip idea. Not sure why, but it seems appealing to me lately. Usually I'm a sort of no non-sense, traditional nail polish kind of girl. Red, pink, tinted clear, the wackiest I usually would get would be silver, or maybe a glitter. But something about the idea of the french manicure with the non-traditional colors is calling to me.
It looks ok in the picture above, but I'm worried that if I try it, it will look too bizarre on me. I mean I'll admit that when I see weird nail styles on other people I usually think they must still be in high school, or they wish they were still in high school.

Well, I'll let you know what I decided. And I'll take pictures if I decide to go for it.
Posted by renee at 1:57 PM No comments:

Email ThisBlogThis!Share to TwitterShare to FacebookShare to Pinterest
Labels: nails

As promised, here are some pictures of granny afghans that have inspired me:

I'm leaning towards the first two examples for what I have in mind for my friend. I really like the classic look of the same color in the last row. It looks very vintage and classy if white or off-white is used, as you can see in the last picture, but I want something a little more fun for this particular friend which is why I like the idea of the last color being a true color instead of a neutral. I think the trick of this is to choose a good base color. One that isn't a neutral but can act as one depending on the value. I also really love the picture of just the crazy grannies with no apparent rhyme or reason, but I suspect that this crocheter spent a significant amount of time picking which colors would look best where. Though it's a beautiful blanket, it looks a little too modern for what I want to do. As does this one:

But I LOVE, love, love this one! One day I would like to make one like this for myself. All rugged, natural, earthy, colors. And I like the look of the one color in the middle with the two rows of another color. It makes this pretty sort of flower-like motif. Hmmmm...someday.

I'll leave you with this last picture of a granny square headboard. What a GREAT idea for a little girls room. Actually I would put this in a guestroom, too. It's very warm and homey looking.

This headboard was made by Little Purl of the Orient.
The rest of the pictures I found on Flickr and/or Ravelry.
Posted by renee at 8:35 AM No comments:

Well, I was going to start this post with a history of the Granny Square, but lo and behold, I couldn't really find one anywhere on the internet. I'm thinking granny squares are one of those things that just ARE. Crochet is notorious for this sort of thing. No one can even really pinpoint when and where crochet first came into being. It just showed up one day.

I can only assume the granny square must have first been done by someone's granny. And really that granny was an ingenious little lady. There are so many variations that are possible that it blows the mind. What I find fascinating is how different they can look depending on size, color choice, yarn choice.

I'll admit, the picture above is somewhat campy. This magazine is from the early 80's when the granny square was just about to go into hibernation after it's heyday in the 60's and 70's. Now it's back again and I've caught the fever. I've been browsing around ravelry and flickr for days now, just ooohing and ahhhing over all the different variations I've seen.

I'm finding myself drawn to the blankets that look sort of vintagey and modern at the same time. I have a friend who is very in to everything 70's and I'd love to make her a granny square throw. 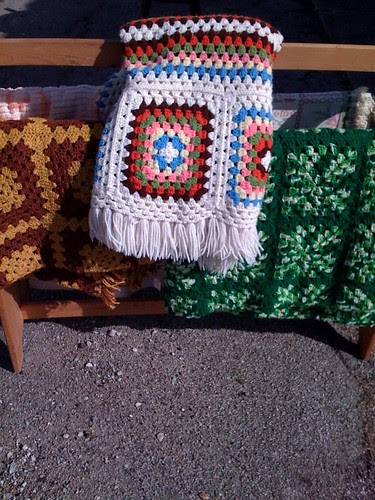 Here are some grannies I found on the side of the road at a place called Lovejoy. I actually asked my husband to climb out of the car and take a picture with his iphone. (What a guy!) The one I really like is the middle one with the white border. I find that you can do almost any kind of crazy color combos with a granny afghan and as long as you do the last row of every granny in the same color it ends up looking very together and posh. I have some plans for what I'm going to do for my friends throw.

But I don't have time now to explain all that so I'll have to wait until the next post. For now I'll just leave you with this.. 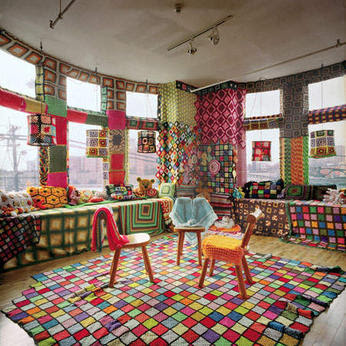 Don't have time right now to do a proper posting, but I wanted to post a little teaser of what's coming up.

I see Granny Squares in your future...

Yes, I'm excited even though I can't see the movie today, or even this week.

I'm waiting until Thanksgiving so that all the craziness will have (hopefully) died down.

So far everything I've seen shows that this movie will be spectacular. I'm especially looking forward to seeing the special effects. Also, I'm really pleased that the actors that were chosen to play these characters seem accurate and seem to coincide with the books descriptions.

I HATE it when they make a movie from a book and the characters are nothing like what the author described. I also hate it when they go for box office appeal instead of staying true to the integrity of the character. A perfect example of this is Tom Cruise as Lestat in Interview with a Vampire. What a freakin' disaster that was. That movie could have been SO much better had they chosen an actor that didn't make half the people that loved those books gag. They also could have made a lot more movies.

Well, thank God someone got smart and chose believable actors for Edward and Bella. I would not have liked to see someone like Hayden Panettiere with died brown hair playing Bella. Though I will admit that while I was reading Twilight, I kept picturing Alexis Bledel as Bella. Kristen Stewart was a better choice, though. I've only ever seen her in Panic Room, but I thought she did a really great job, especially considering having to play opposite Jodi Foster.

Well, I'll be sure and post my review after I've seen the movie.

Oh Ripple how I love thee... 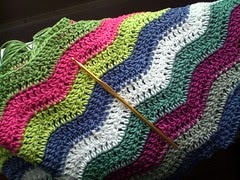 I just love this picture! I'm showing it off because sometimes I can't believe I actually made something so beautiful. And then I even managed to take a beautiful picture of it.

This blanket is magical that way.

I'm sure you'll see it again.

This is my second blog. The first one was a knitting blog and it was pretty boring. I thought I would never run out of things to say about knitting and yarn, then I got pregnant and the 9 months of morning sickness made me lose the will to live much less blog or knit, so I deleted the whole darn thing. So this time instead of making this about knitting or crocheting or any one thing, this is just going to be my blog where I talk about whatever I freakin' feel like talking about. No doubt, there will be lots of talk about knitting and yarn and crocheting, but there will probably also be rants about traffic jams and childrearing and how much I hate living in Houston and how much I miss Gilmore Girls and how excited I am about the Twilight movie coming out. (Yes, I am secretely a 15 year old girl still.) Because the thing is, I have LOTS to say about EVERYTHING. Ask anyone who knows me. I never shut up.

So I named my blog East of Eden because it's my favorite book. Really, I have a crapload of favorite books, but this title just speaks to me somehow and I love it. Also I live in Houston which is East of Austin which is my hometown and my general idea of Eden and so it's very fitting, don't you think?

Ok, well, I'm tired and I need to go to bed and drift off thinking of clever things to say in my new blog.

Here's a pretty picture to look at. (I like colorful things.)