Why did this take so long? 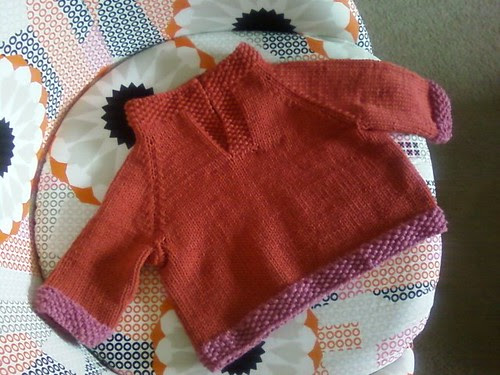 So a friend of mine sent me an invitation to her little girl's 1st birthday party one day. It was sent a good 3 weeks before the actual party which should give me plenty of time, even with a rather rambunctious 2 year old on my hands, to make a simple baby sweater. Right? Suuuuure.....

Well let me just tell you right now, that's not how it happened. And the thing is, I still can't really explain why. I was so sure this would be a quick and easy project. So Sure. I read up about it on Ravelry, and almost universally the word on the street was that this baby could be worked up in a matter of days. Certainly 3 weeks should be plenty of time.

And how long did it actually take me? Well, I lost count, but I'd say it was a little over a month. Now there were some factors contributing to this.
1. Out of town husband for 2 weeks which means no one to relieve me and give me some knitting time.
2. Never really have knitted a baby sweater before. But how hard can it be? It's just a small sweater for God's sake.
3. Had to start over once because it was turning out way bigger than I expected according to what I thought was a "good enough" gauge estimation.

Still this was supposed to be easy, and it was NOT.

The pattern is from the book Last Minute Knitted Gifts, (yet another reason why I thought it wouldn't take too long), but it's also available for free on-line. Maybe someone else will have better luck with it. Though I should say that it did turn out just as cute as it was supposed to turn out, it was just way more trouble than I wanted it to be.

I used Lion Brand Cotton Ease, which is a good substitute yarn, but it's a bit thicker than the recommended yarn. It's also a little harder to work with than wool would have been. The sleeves, which were done in the round, then attached to the body ended up being a bit of a stretch, also there were huge gaps to be sewn up under the arms aside from the kitchener attachment method in the pattern (which by the way, I totally ignored and did a three needle bind off instead). In retrospect, if I ever attempt this pattern again, I think I'll just go ahead and do the sleeves back and forth and seam them up the inside of the arm. Which will be just as much trouble as all the kitchener and sewing up gaps nonsense ended up being when I followed the pattern as written.

I also omitted putting buttons or beads on because I didn't feel like doing button holes by the time I got to that section and I didn't have any beads that would fit through the seed stitch without being too small or too big.

Just in time for the warm weather. 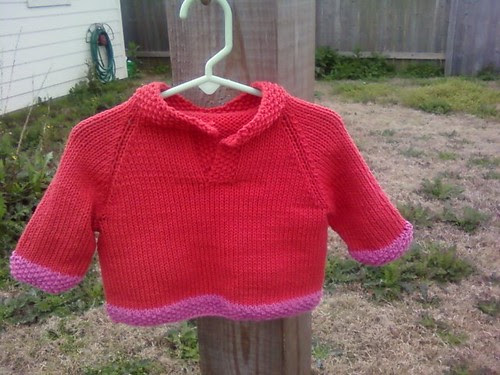