Finally finished the Frock Camisole. It was super easy and it was just as cute as I wanted it to be. 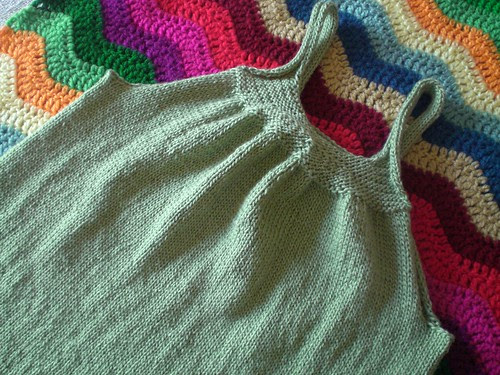 I"ll probably knit it again because it really went fast and it's very comfy and somewhat flattering. If I do knit it again, though, I'll pick a different yarn and knit one size bigger. The Caron Spa is lovely and oh so soft, especially after washed and dried, but I just think this top would be prettier and maybe drape a little better in a cotton yarn. The Spa makes me feel like I'm wearing a nightie top. It would be really nice for a comfy oversized pullover or cardigan, and I'm already planning to use it to knit my son some pants once it gets cool again. (If it ever does get cool again. This summer feels like it's going to last forever!) The top fits, but it doesn't fit the exact way I was planning. I have a little too much boobage for this size.

Here's a close up of the yoke: 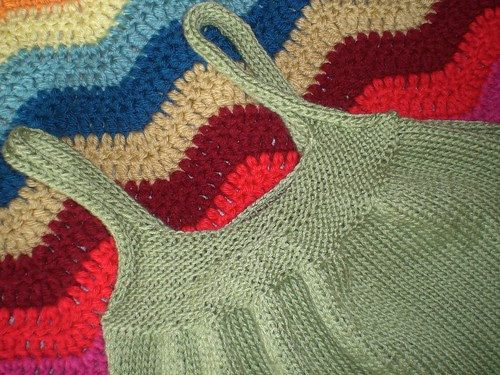 I love the way the reverse stockinette curls up the straps like that. I made a few booboos on this part, but the pattern was pretty forgiving. I also made the straps about an inch shorter than the pattern calls for, but I might make them longer next time.

I think this is the first garment I've ever knitted in the round and I am now a big fan of knitting in the round. No seams to sew and once you're done, you're DONE! LOVE THAT! I used to avoid the circular needles because they just felt weird to me, but I'm over it. It's all about getting things done quickly now.

Here's a little preview of what I'm working on now: 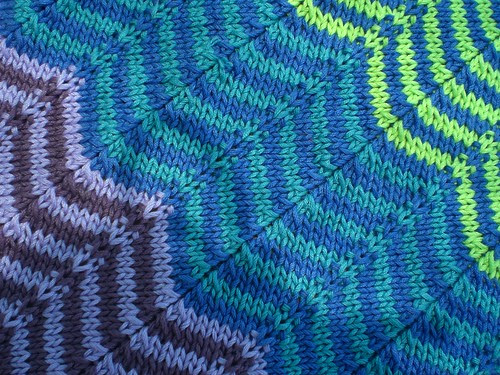 I'm not going to say what the pattern is yet, because I'm just not sure how or if it's going to work out. It's a bit wild!
Posted by renee at 9:55 PM No comments: