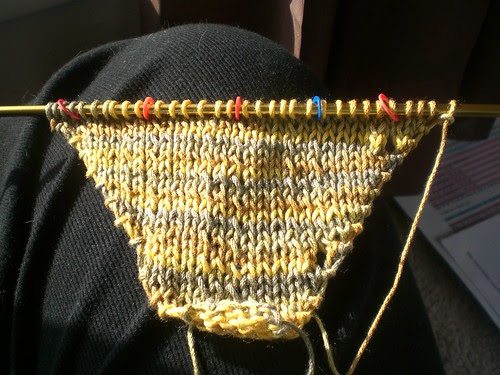 SO! Last week I started a Clapotis. Yes, despite the fact that I have a sweater to finish that I've been working on for months. Despite the MANY baby items I need to knit for my ridiculously fertile friends who all seem to have babies due within the next few months, despite my OWN baby who is in some serious need of some cute little knitted baby bell bottoms. Despite all this and more I started a Clapotis last week.

It happened when I went to my LYS on a whim while I was finishing up my Christmas shopping. I have no idea why I went in there. Perhaps I just needed a safe place away from all the Christmas crazy. Or maybe it was just the joy of being able to look at yarn without worrying about the baby. From my experience baby in a yarn store = bull in a china shop.

So there I was just browsing and fondling like usual when I came across a Clapotis that someone had made and just sort of draped, casually, across a display shelf. Now, I had, of course, heard of the Clapotis. And in my mind I think I thought something like this, "Hmmm... that's a clever little pattern...maybe someday, but probably not..." And I really didn't see how it had become such a craze/addiction for so many people. I mean it's just a scarf, right? And I really have no need for anymore scarves. I already have a ton that I never use anyway. I mean, I live in Houston for crying out loud. We have exactly 2 or 3 days of scarf weather per year and on those days I usually just stay home. And even though people say the pattern is easy, the directions looked pretty frickin' complicated to me, and one of my knitting philosophies is that if it's too complicated then it's not for me. But more on that later. The point is, for several reasons I just did not really ever think that I would catch "the Clap."

But then I saw that Clapotis just lying there, casually, but seductively, almost as if it didn't even really want to be noticed (but it knew that it would be.) And I picked it up and I slipped it around my shoulder and around my neck and just like that... I caught "the Clap." (It's apparently outrageously contagious, inflicting it's victims with even the most casual of contact.) I HAD to have one. Now, admittedly, part of the luxury of that particular Clapotis was probably the yarn, which was Blue Heron Rayon Metallic and about $40 for one hank, thank you very much, but seriously beautiful and probably worth every penny. And I did actually consider buying it just so I could have a Clapotis just like that slutty one in the store, but I managed to take hold of my sensibilities just in time and then I ran out of that store.

I went home and I tried to forget about the Clapotis, just not think about it at all. I mean I was seriously busy, here. I had a ton of stuff to get done and a ton of projects already started and needing to be finished and I could not allow myself to buy any more yarn right now anyway. But before I knew it I was looking up the Clapotis on ravelry, you know, just browsing, just wanting to see what everyone else was doing and thinking about it, no big deal. I should have known it was all over once I looked on ravelry. 9335 Clapotis projects and counting. So I thought, who am I to try to resist. But what really finally convinced me was that I realized I had the perfect yarn in my stash already. (DMC Senso Harlequin) I bought it probably a year ago just because I liked it. I had no idea what I would do with it and I just bought all that the store had left, which wasn't a lot, but then I came across 2 more balls a few months ago on sale and I bought those two, still having no idea what I would be using it for. So total I had 800 yards. Perfect. Kismet. I mean how could I prevent this from happening when it so clearly wanted to happen. And I would technically be doing a good thing by using up some of my stash. Right?

Well, then I had to figure out the pattern, and I'll admit, I was intimidated. I mean there was just lines and lines of abbreviations with parentheses and kbl and pfb and kfb and p2tog and all kinds of stuff that I only knew how to do in theory, having never actually done it before. And then while looking through the ravelry group for the Clapotis where people just get together on line and rave and contemplate and gush over the Clapotis, I found that there are spreadsheets for this pattern. Spreadsheets!

Ok, so I printed out my spreadsheet and I sat down to start the pattern and right at the beginning I'm stumped. Pfb. Purl front and back? WTF? How do you do that? Well, I looked it up and I'm still not sure I'm doing it right, but it's working and that is good enough for me. All in all, I probably had to do the start up rows 4 or 5 times before I stopped messing it up, but now I'm tootin' along and am almost to the part where I can start dropping stitches, which from what I've heard is one of the highlights of the joys of the Clapotis.

So far I'm enjoying the process though I can tell that it will probably become a bit tedious after awhile, but I can't wait for the finished product. The yarn I chose is technically a crochet thread, so it's very light. Almost fingering weight which is perfect because I'm really hoping to be able to wear this scarf despite the mild weather of Houston. And I'm loving the earth tone variagation of the yarn. I don't even mind the occasional pooling which I know annoys some knitters, but I think is rather interesting and pretty, especially if it's something like a scarf that won't be stretched over any bumpy body parts.

More pictures soon!
Posted by renee at 8:42 AM