I don't think people read blogs anymore... do they?

Who wants to hear the 888 reasons why I totally abandoned this blog?  Anyone? Well, of course you don't.  Who cares? And anyway, excuses are boring.  Let's just say- Life happens.  And I'll end up giving at least a few reasons why this blog went dormant along the way I'm sure, but for now I'll just say- Hey! I'm back! I don't know for how long, or how consistently, but for reasons I'm not even sure I can explain, I've decided to go ahead and revive this silly old blog that was supposed to be about whatever I wanted it to be about, but ended up being about knitting and crocheting and then ended up being about nothing because I stopped writing it. (heh)

So, first things first: That last post was a bit of a teaser so I'll finally show you what it was: 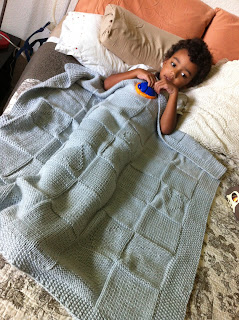 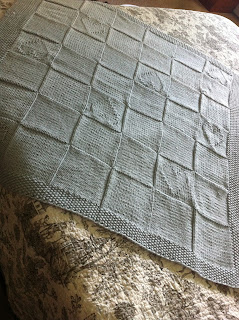 It was blanket I made for a dear friend who had just adopted a baby boy. These photos aren't the greatest, but they'll have to do because I don't have the blanket anymore to take pictures of it. The recipient loved it, though, so that's all that matters.  This one was actually my own design and I think I had plans to write it out as a pattern and share it here, but well... oops.  I did take a lot of notes and made a graph for the heart and everything, but I lost the notes, found them, then lost them again. So if I find them again I promise I will write this up and post it here.  I was very proud of the fact that it was completely reversible- it didn't have a wrong or right side so it looked nice no matter which way it was laid out or used.

Okay. That's it for now.  I just realized I have to completely refigure out how to post photos and stuff. But I do have lots of new stuff that I'm excited to post here so once I figure all that out I'll be posting some new projects! Yay!

(Also- I'm not sure that anyone is even out there reading this blog, so if you're there and you do want to see a pattern for this, write me a comment and let me know because that will greatly increase my motivation to find those notes and write it up.)