I got the mitts! 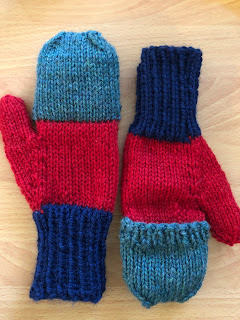 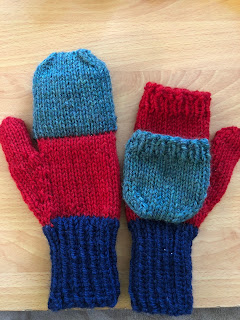 I am extremely proud of these, my first ever, mittens. This was a big learning curve for me and I've never been what anyone would call an adventurous knitter.  Plus I've always felt super awkward when using double pointed needles so I avoided it whenever I could, but Mr. Boy needed mittens and the cheapo acrylic ones I bought from Target (twice because he lost one somewhere in Kentucky on a road trip for Christmas vacation and it was a complete fiasco!) were not going to cut it.  And I knew he would want flip-top mittens (because the infamous Target ones were flip-tops) and really who wants to take off their entire mitten just to zip up your coat or backpack? Well some people do I guess because there are a ton of super cute regular mitten patterns available, but I don't and neither does Mr. Boy.

The pattern I used for these were actually not fliptop mittens so I had to modify it which is another thing I usually don't do, but this time I did it and pretty successfully, too! I will admit to making a few hilariously ridiculous mistakes (like making the thumb long enough to almost reach the top of the mitten) and having to rip back parts of the first mitten more than once (actually more than twice) which is very scary for me because again, I'm not adventurous, but it worked out in the end and I'm feeling like maybe I've jumped up from intermediate knitter to beginning advanced.

At first I was worried that Mr. Boy would reject these in favor of the Target ones, but he loved them instantly and now won't leave the house without them, even when it's not really mitten weather.  Which makes me so proud I could burst into spontaneous song like Julie Andrews in The Sound of Music.

That reminds me that I have to make a back up pair (or two) so we don't have a repeat of the Kentucky Mitten Fiasco.

Mitten stats on Ravelry.
Posted by renee at 8:16 AM