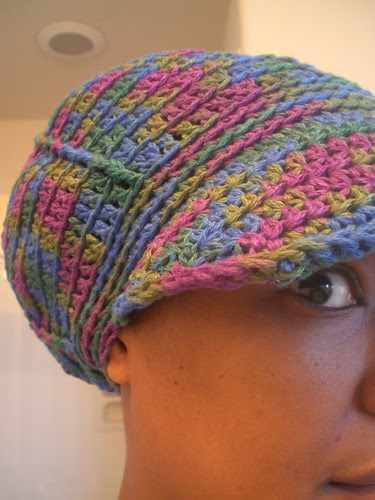 This is the Magic Hat. I decided, on a whim to make myself a hat this winter. It was one of those things where you just suddenly decide that you need to drop everything and make yourself a hat. (I don't really know if this happens to anyone else, but it happens to me.)

First off, I should say now that I have bad mojo when it comes to hats. They just never work out, no matter how hard I plan, or how carefully I pick out my pattern. It always turns out wrong somehow. Either too big or too small or it fits but it looks stupid on me. And at one time I had just given up on hats entirely. Just decided that I wasn't really a "hat person." But then for some reason I decided to try again. Maybe I saw a hat on someone and liked the way it looked and got jealous. Or maybe I was just really cold. I really don't remember. Probably it had something to do with wanting to buy myself some yarn and the only way I could justify it was to tell myself that it would only be a couple of skeins... just enough for a hat.

My first candidate was Le Slouche by Wendy Bernard. Well, I made it and it turned out looking pretty good and then it just streched and stretched and stretched until it was covering my eyes. I'm thinking that had to do with the cotton yarn, but I'm not sure if I just made it too big or what. Anyway, it didn't work out and I didn't like it enough to make it all over again, plus I decided I wanted a hat with a brim anyway. (I'd been seeing these cute little slouchy brim hats everywhere and I HAD to have one.)

Well, to make a long story short, I eventually had to resort to changing from knit to crochet, then I ended up having to combine two different hat patterns to get the hat I wanted. And I had to crochet in some elastic around the base to keep it from stretching out. (A little trick that I took from inspecting a bought hat that was cute, but too small from me.) There were times during my Hat Journey where I almost gave up. I must have made this hat maybe 4 or 5 times before I finally figured it all out. So maybe I should call this the Perseverence Hat. The Holy Grail Hat. Whatever. It's Magic to me because I finally have a hat that I love. I had to modify the pattern greatly to get this particular hat, including going to a whole other pattern to get the brim. The pattern itself is easy, but it's more of a suggestion than a pattern as far as I'm concerned. Anyway, it all worked out in the end and now I have at least one hat pattern that I know fits my head. WOOHOO! 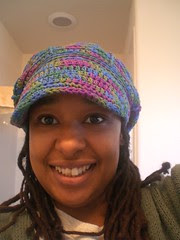 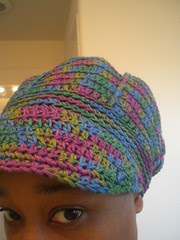 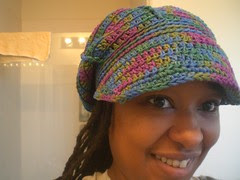 Love that I can wear it with my hair down, or all tucked up inside, too.

I liked the yarn, especially the color, but I think if I make it again, I'll choose a solid color. I always feel like variegated yarn looks kind of cheesy in crochet and had I known I would end up switching to crochet I would have chosen a solid color to begin with.
Also, you might notice that the brim doesn't really match up with the little seams very well, which makes the hat look slightly wonky.
Oh well.

(Modifications on ravelry)
Posted by renee at 10:16 PM