I'm still in the planning/inspiration phase of this project, which is actually my favorite part of any project. I love the planning, dreaming, wondering part of projects even better than I like finishing it. Probably why I have so many UFO's floating around.

I've been wanting a bedspread for our queen size bed ever since the weather became warmer and I realized that a crocheted blanket is the perfect thing to keep you just warm enough during the hot Houston summer months. I've always used comforters year round, but now, after having a baby, I find I sweat like a horse at night if I'm under a comforter. Right now I have a ripple blanket that I made last Hurricane season on the bed. It's pretty and it looks nice, but it's not quite big enough to cover the whole bed and it's bit bright for my decor ideals. 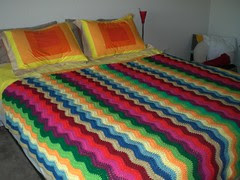 I'm looking for something a bit calmer and classier. If I had more time and patience I would do something like this:

I want that classic one-color crocheted bedspread look, but with a bit of a modern twist, but really who has time to sew all those freakin' squares together? Not me. So I did some looking around and came up with Andalusia. It's a free pattern from Berroco and it's pretty much perfect for my needs right now.

It's still sewing squares together, but the squares are bigger so it shouldn't take as long, and I like the little flower detail, but that's it's not too flowery. I don't want to drown my poor DH in crocheted girliness, but I want something a little classic and feminine that reminds me of those antique crocheted bedspreads you see on Grandma's bed or now, mostly in antique/vintage stores. This pattern is only big enough for a throw, but I'm going to just keep adding on squares until it's as big as I need it to be. I may try to find some sort of border, too, but maybe not. I kind of like the clean lines of the sc border, not sure if I want to mess with that.

Here's a detail of the square close up:

Now the main problem is that I can't quite decide what color I want to do. I'm not used to having to settle on just one. I like my colors! I thought about doing just the flower part in one color, then everything else in another color, either two very different colors, or two shades of the same color. Like dark green and light greeen or gray and white, but I think that would mess with the general antiqueyness that I'm trying to create. And then there's also just which color do I want to choose. I'm pretty sure I don't want to go with pure white or even off white because I have a small child and 2 cats and a dog. No white. But a soft grey might be nice, or even a taupe. Still not sure and it will probably really come down to just whatever I see in the store when I go to get the yarn. I've pretty much decided that I'll use Cotton-Ease for the yarn, inexpensive, but not too cheap and it shows great stitch detail, which I really like for crochet. Also, machine washable and very durable. I'll probably do some swatching too, just to see what looks good and which size hook I want to use.