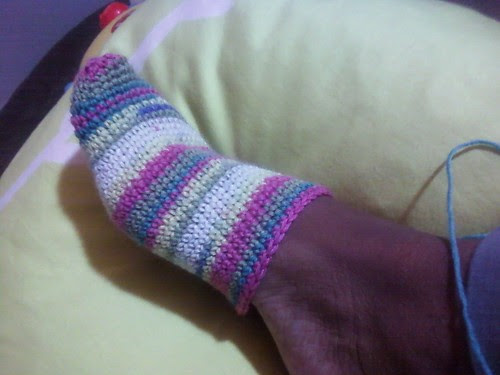 1. Crocheted socks are easy!
Seriously. They are. Back in the day, when I was a new crocheter, I picked up this book from the library, thinking that I would maybe make me some socks. I read through a couple of patterns until my eyes crossed and returned the book thinking to myself, "Well, that's not gonna happen..." The patterns in the book are actually easy, but they weren't easy enough for me at that time. (I like easy things, in general.) If only I had known that:
2. You don't even really need a pattern.
I'm not sure what made me start thinking about crocheted socks again. I guess I was getting tired of trying to think of summery things to knit or crochet. (I'm SO ready for Fall to be here.) So I was browsing around ravelry and I came across this pattern, and I thought, "Well, I can do that..." It's really more of a simple, general explanation than a pattern, but somehow, it was just what I needed to give me courage to try to make me some socks. And low and behold... 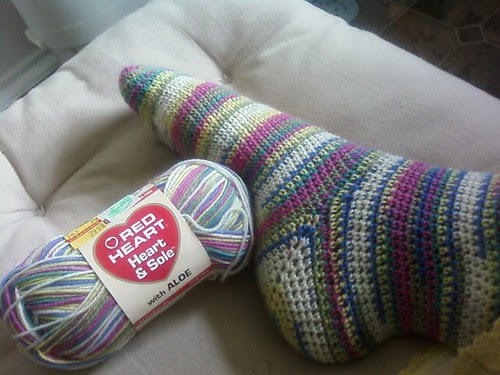 Before I knew it I had one sock finished. Which leads me to cool thing number
3. Crocheted socks are fast!
I took me maybe a day and a half to finish this one sock, and that's while running around after a very busy 19 month old. Which leads me to
4. You only really need some yarn, a hook, and 2 stitch markers.
Also maybe a needle to weave in the ends and sew the afterthought heel closed. (Though if you want you can also slip stitch it closed. Which I tried on the first sock and it worked, but wasn't as pretty as sewing it closed.) Now, let's just take a moment to fully appreciate the magnitude of #4 here. You only basically need one hook and some yarn. That's one hook compared to 4 or 5 double pointed needles or two circular needles or one super long circular needle. I don't know about anyone else, but for me that is a big deal. For one thing, my little one loves to sneak up to me and pull whatever I'm working on out of my hands. Let's just imagine for a moment how devastating that would be if I were trying to juggle 4 or 5 needles and he ran up and grabbed one... Not a pretty picture. But when he grabs my hook, I can just giggle at him, chase him down, and finagle the hook out of his hand, then get right back to work, redoing the two or three stitches that got pulled out by his mischief. "No problem, sweetie... aren't you cute..." So maybe #4 should be, "Crocheted socks make you a better Mommy."
5. You get to use sock yarn.
I, for one, have always gazed longingly at the sock yarn. Especially now that you can even get it at any old craft store that also sells Red Heart Super Saver. But I never really bought any because I never made socks. Sure you can make other things with sock yarn, but I never did. But now I plan to happily browse through the sock yarns, just dreaming and scheming about all the cool socks I'm going to make. Yippee!
6. If you use an afterthought heel you can replace the heel part when (not if) it gets worn out. Now there are other heel methods that can be used when crocheting socks. There's the short row heel and the gussetted heel. Both of which are sort of copies of the heels of knitted socks. But I can't really see any great benefits to either of those types of heels. Looking on ravelry I saw a lot of complaints and confusions related to both these heel types. Even so, some crocheters seem to see them as superior in some way to the afterthought heel, maybe because they're harder, or maybe because they copy the knitted sock heel. But personally, I think the afterthought heel is the greatest thing since sliced bread. For one thing it is spectacularly, extraordinarily easy to do. For another thing, I think it's a whole lot prettier than the other ones, mainly because with the afterthought heel I can keep the lovely spiraling stitch pattern that I started out with, and that you can only get by spiraling, instead of interrupting it to suddenly start working back and forth in rows. It gives the finished sock a sort of continuity that looks really beautiful so that you can't necessarily see where the sock ends and begins. I love that.
7. You can custom make them to fit your foot exactly.
In fact that's why you don't really need a pattern. Because you try them on as you're making them to see when to do the next thing.
8. If you make a mistake, it ain't no big thang.
Since this is crochet, not knit, making a mistake means just pulling out the hook ripping to exactly where you need to, then putting the hook back into one live stitch and moving on with your life. It also means you can play around a little. You can try new things, be creative, try a ripple or a ribbed cuff or a fan-stitch, or lace, or filet crochet, tapestry crochet... the possibilities are almost endless.
9. Crocheted socks are very comfy, very warm, and Yes, you can wear them with shoes.
I don't know who started the nasty rumor that crocheted socks can't be worn with shoes, but I'm guessing that same person probably can't sleep with a pea under her mattress either. The fact is, if you use a small enough hook and thin enough yarn (I used an 3.5mm E hook with Red Heart and Sole yarn) they can be easily worn with shoes. They are a little thicker than the thin socks that you can buy in packs of 6, but they aren't like slippers. The stitch pattern that single crochet makes is a little different than stockinette stitch, but I got used to it pretty quickly and I'm fairly sensitive skinned. If you're skeptical, go ahead and give it a try. It's a quick enough project and if you don't like them you can always give them away to someone as a gift because
10. Crocheted socks make great gifts and people are impressed by handmade socks, knitted or crocheted.
As soon as my mom saw them she tried them on then "ordered" 2 pair. Though some knitters may turn their noses up at crocheted socks, non yarn worshipping people generally don't even know the real difference between knit and crochet. All they know is, "Hey, someone made me a pair of socks with their own two little hands! How cool is that!" Personally, I love the fact that because crochet can't be duplicated with a machine, crocheted socks can't be bought, only made. So there! 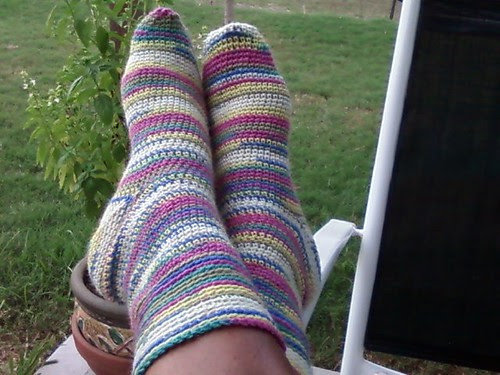 Update:  The pattern I used to make this is no longer available apparently.  The link isn't working anymore.  Too bad because it was sort of perfect.  But I found another one that is similar, though it starts at the cuff and works down to the toe instead of toe-up like I did for this one.  (Toe up is easier, I think.) Soon, I'll have to write out the sock recipe that I used to make these.
Posted by renee at 12:29 AM

Wow. You crocheted socks! They are really really nice! I have sock envy now.

Thank you! You should make some! They are SO wonderful and SO easy! I just bought some more sock yarn today to make another pair. My goal is to eventually wear nothing but socks I crocheted myself. Oh and after you wash them they get softer and even more wonderful!

I have never heard of corchet socks before but I will dief give them a try...they look really good too. I am guessing they might be a bit thicker than knitted socks and that is good because i want to make some hiking socks for me and for my little boy.....thanks so much for sharing this!

Thaks for stopping by my blog - lovely blogpost and great socks :-) Just in case you thought I didn't agree that crochet socks were the bees' knees, here's the proof
http://gingerschatz.blogspot.com/2010/07/pattern-advent-baby-socks.html
Now I just have to work on my Project Commitment Issues and make not one, but two adult-sized socks!

AWESOME!! I found you through your iCrochet link. When I saw the socks, I HAD to visit. Thanks for the inspiration to give this a try. I LOVE your socks :)

DEar friend, When I was looking for a pattern of crochet socks, I found your blog. Really very thank you for sharing. Just now I ll begin to make these socks. I wish I could. Thank you and best wishes..

Hello, I found your link you lost in the beginning of the post... http://graftonfibers.com/toeupsocks.PDF ~ I hate for a computer to tell me something is not where it is supposed to be! These socks look great...I have never tried an after thought heel, but these look so good, I think I am going to have to...Happy Crocheting!!

Thank you, JB for sharing that link!

Michelle said...
This comment has been removed by the author.
Saturday, November 29, 2014

Lol, now I see someone else found it first!

Was that the correct link, with the PDF?

And a third comment, because I'm crazy and thorough.

Here's a snapshot from the Internet Wayback Machine for the original pattern page!

Thanks, Michelle for the snapshot. I don't know why that link can't just stay put! LOL! I'm currently working on my own sock pattern that I will publish here, probably after Christmas and once I have it exactly the way I like it. Thank you for stopping by!