pring has definitely sprung here in Houston this last couple of weeks, which means that I've switched gears from blankets, scarves, and shawls and moved on to warm weather crochet.  So far that means bags.  I've been a little obsessed with crocheted bags.  I'm sure this has something to do with my purse addiction. Did I mention that I have a purse addiction?  Well, I do.  It's pretty serious.  The only problem is that the money situation has been just a leetle bit tight around here lately so no new fabulous purses for me... Unless... Well, hey! I can just crochet myself some new bags!

I've been flirting with the idea of clutch bags.  The problem is, I'm not one of those women who can just throw a lipstick, a phone, and a credit card in my purse and be good to go.  I have needs, people!  Which generally means that I tend to carry around the equivalent of a small suitcase with me wherever I go. But whatever, clutches are so cute and they're suddenly everywhere so of course, I must have one.

Sooooo... Here's my first attempt at a crocheted clutch: 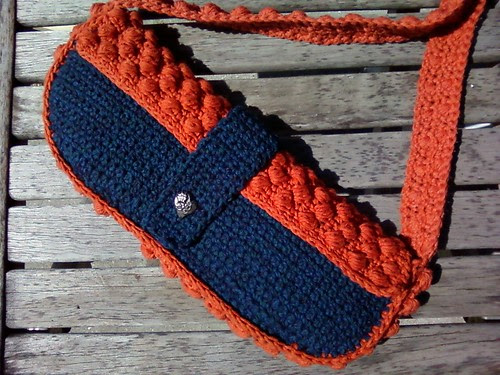 The pattern is called Textured Tweed Clutch from the Fall 2005 Interweave Crochet.  (It's also available as a Ravelry download.)  I changed up a few things:
The pattern calls for a 100% tweed wool yarn which I didn't use because it's supposed to be a Spring purse and that to me means it needed to be cotton so I used Red Heart's Eco cotton blend instead.

The original pattern is all one color, but I didn't have enough of this yarn in all one color in my stash so I used the two colors I did have.  More on that decision later.

The pattern for the base of the purse is supposed to be a seed stitch pattern, but I tried it and it was kind of wonky to work and with the dark color I was using it seemed a whole lotta work for something that you could barely even see so I just switched it up to straight single crochet.

The original pattern calls for a buckle closure, but I didn't have a buckle handy and I had decided that I would not be buying anything new for this project so I improvised with a button hole and a button I happened to have lying around. 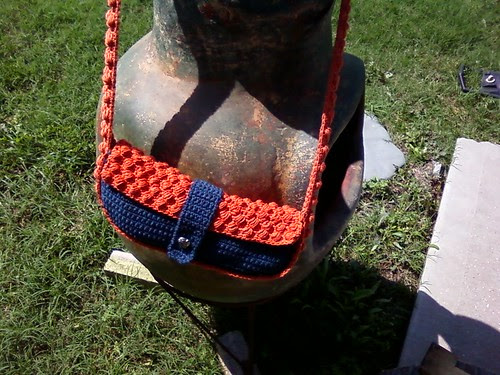 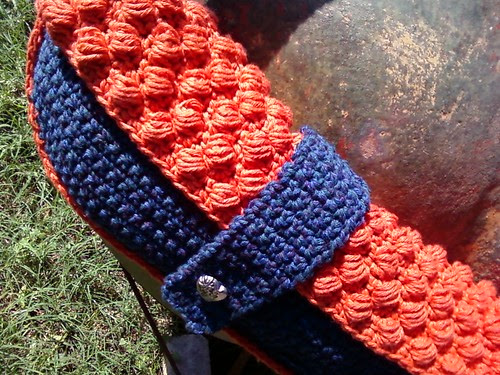 So it's cute, right?  Look at those cute little bobbles in the close up.

But here's the thing:
As soon as I finished this purse I thought to myself, "Now what the heck am I gonna do with this?  Where would I ever wear it?"  The colors are, well, all right, but I have almost nothing to coordinate this with.  The size is a little weird too.  It's not really small enough to just be a cute little afterthought of a clutch, but it's not big enough to truly carry all the stuff I need it to carry.  Also because it's weirdly oblong, it's sort of floopy.  I had to stuff it with scarves to take these photos but without the scarves it kind of folds up on itself.  It truly probably needs some sort of reinforcement sewn into it to help it keep it's shape, but I just don't love it enough to do that much extra work on it. 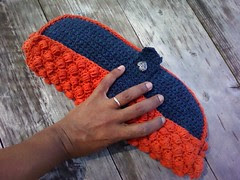 Here's a couple of pictures with my hand and tucked under my arm so you can get an idea of it's actual size.  I tucked the strap inside to see if that would make it any more usable for me, but it just makes it look weird.  (Please ignore my oh so stylish tie-dye ensemble.)

So, even though I don't hate it, I don't really love it, either.  I'm just going to chalk this one up to a learning experience.  Onward I march in search of a clutch design that will work for all my little niggling idiosyncrasies.

A word about the Eco-cotton blend yarn.  It is a lovely yarn and I will probably use it again, but not with the puff stitch.  Not ever again.  It took f o r e v e r to get those little puffs to work with this splitty yarn.

I'm sure a die hard Broncos fan would love it! LOL! I live in Colorado and see the color combo quite a lot.

As for the size and style, I actually really like it. It's perfect for sticking your little projects into for traveling around town... (I"m a geek that way.)

Thanks everyone! That is particularly funny about the Broncos fans loving it. I didn't really think about the fact that they were "team" colors when I was making it, but they totally are. HA!
Marjo- the pattern is from a magazine, but you can also download it from ravelry for $4.